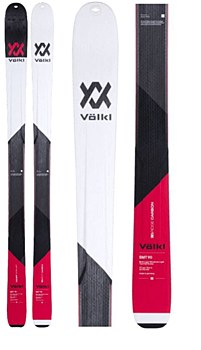 The model with the biggest range of use in the line. Impressively light (1410 g @ 177cm) and 4 mm narrower than last year’s model the BMT 90 is predestined for the formerly traditionally oriented touring skier, who’s expecting more pressure under the boot during the ascent but who’s also daring to explore new freeride territories on the way down. The new BMT 90 brings huge versatility to skiers looking for a light weight setup capable of long tours that can also ski the whole mountain in bounds in a variety of conditions. Its full carbon jacket construction makes the ski smooth and stable, while tip/tail rocker with camber under foot deliver liveliness and maneuverability.