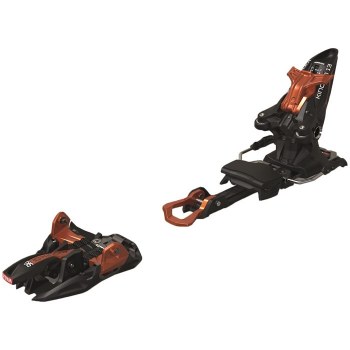 The innovative Kingpin has earned its stripes as the performance standard in PinTech AT binding technology. The Marker Kingpin 13 has Sixpack Power Springs which deliver boosts of energy with every gliding step. The XXL Power Transmitter is a revolutionary heel construction that uses widely placed contact points which holds the boot on its outermost edge, eliminating wobble in turn initiations. The Marker Kingpin 13 is fully ISO 13992 compliant and has a DIN of 6-13, which allows alpine touring skiers a binding that is light enough for long days with the reliable performance of a solid alpine binding for the freeride of your life.
With DIN/ISO 13992-2007 certification from Germany’s prestigious TUV testing organization, its unique design and new toe and hell pieces are the culmination of years of R&D testing including over one million vertical feet on snow. The new leader for ease of use DIN/ISO certified release function, and unbeatable power transmission.